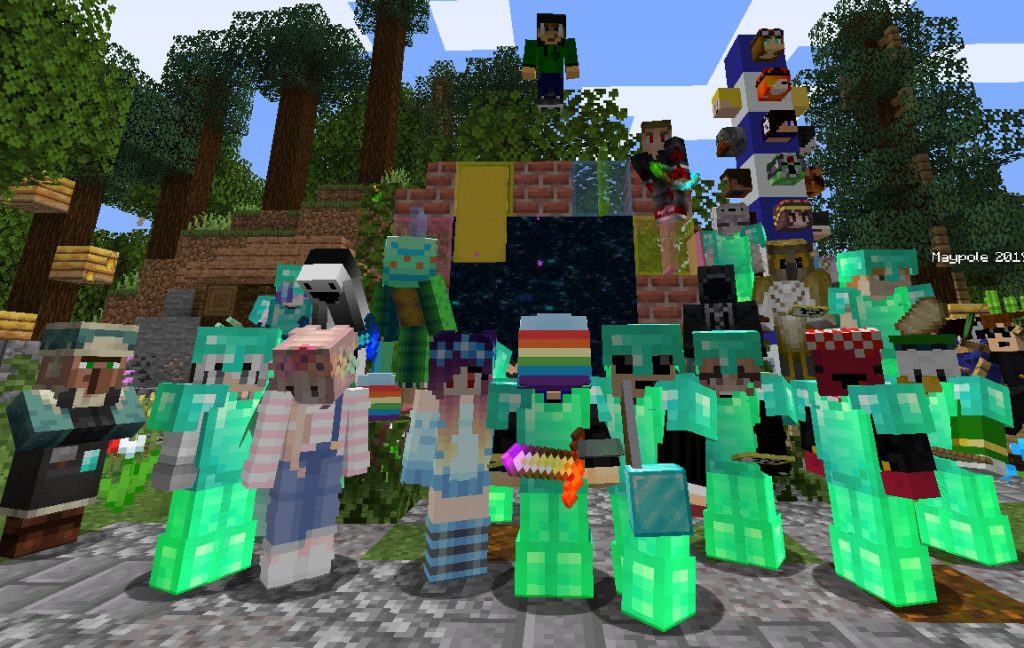 This year, Cavetale had its tenth anniversary. When the exact date came around in January 2022, there was not much time for celebrations, although we had a decennial themed Elytra race course prepared for you. It is now time to write up a comprehensive retrospective of this fourth season, which has been the longest running in our history, and in my view the most exciting one yet. This should serve as a reminder of all the changes, hopefully illuminate why they happened, and give an outlook of what lies ahead.

Cavetale was formerly known as Winthier. Before hkenneth founded it, he and I used to play Minecraft on a different server together. As such, we had shared broadly shared views on how a good Minecraft survival multiplayer is supposed to operate: Staying close to the vanilla experience with all its challenges intact, adding only a handful of plugins to help players and admins through the day-to-day and keep things interesting. As such, we had little to distinguish ourselves within the large pond of early Minecraft survival multiplayer servers, way back in 2012.

When hkenneth retired in 2013 I took over all his duties. Seeing myself as the custodian of this community, continuity was my guiding principle. All the way through seasons 2 and 3, honing the vanilla survival game was still the commanding paradigm. Except I had started experimenting with more and more custom made plugins. Coding had always been my passion, and gradually it became my main motivator for running this server. When season 4 appeared on the horizon, we had several mini games, a skills system, cross-server chat, and more. The time felt right to take Winthier one step beyond the vanilla game.

Season 4 launched well enough, along with the name change to Cavetale. We got a brilliant new spawn along with a pristine survival world, but several problems occurred. Not only did it coincide with the 1.13 version of the game, changing numerous internals of the game, for which our plugins were unprepared. In my attempts to preserve the world from being torn asunder or claimed entirely, I did not quite manage to strike the right balance, leaving many unsatisfied with the restrictive policies of Homes and Claims. Although these were revised and changed later on, the damage was done. Some took a break from Cavetale. The cleanup job of now defunct plugins took its toll. The customizations I dreamed of would not materialize in time, and players seemed less engaged than ever. Eventually I took my own vacation from all this, pondering if and how to proceed.

One day Black0ut1 approached me, suggesting we could once again start hosting regular events on a weekly basis. If we organized one simple game each week, then after a while we would have enough to cycle through them. Occasionally it could be a Raid made by the staff where you earn items with unique properties. That could keep participants engaged from week to week, while still allowing me to work on big picture stuff. Get a load of these outlandish ideas, right? It seems obvious now that this was the right idea and would eventually shape the personality of Cavetale and its community. Disillusionment still weighed heavy on me, but we gave it a shot anyway. We went for it, and before we knew it, the weekly event was established, the Kitty Coin item born, as well as the Acula set. But this was only the beginning.

Over time, we developed several hundred customized items and chat icons. Somewhere along the way, we learned how to give items their individual textures via Resource Pack, which not only accelerated our drive for creation, but also invited our talented pixel artists. Most notably, Drodle and killergames1 designed countless item textures, while Dupp produced a plethora of hats. Each week there were two events, many of which had quickly become staples, and each was rewarded with titles, a kit containing valuable items, and ranked trophies, which provide a competitive component.

At the beginning of this process, there was little to lose, so why not use the season to implement numerous ideas floating in the aether, and see what sticks. Countless different concepts were examined, many of which are now at the core of our regular gameplay. There is a friends list where we gift each other items. Skill levels with unlockable talents. A virtual storage container which carries an unlimited amount of items. A tutorial for beginners with quests for advanced users. Even a toilet. Vanilla survival gameplay is still intact on Cavetale, but we augment it so once you are ready to leave your base, you can venture into novel environments and challenges, such as the mining world caves, custom Raids, or Mob Arena, or regular events. These would yield custom item rewards which in turn help you on your journey. Of course, the real reward are the friends you make along the way.

An unexpected respite arrived in late 2020. Partially due to the now very consistent event schedule, but to a much larger extent caused by the lockdown of that year, we were flooded with an unprecedented influx of new players. When we were all locked inside your homes, Minecraft provided a welcome escape, and Cavetale was a ready haven for this newly unleashed tide of adventurers.

Where events used to see 10 or 20 people showing up, practically overnight there would be 40 or even 60 of you guys playing together, pushing the boundaries of many of our games. Claimable land was in high demand. Newcomers would regularly ask for directions. Our staff were more than willing to provide all of these things, by way of helping people out, making plugins, building Raids, preparing or hosting events. Finally we were in our element, and would have been perfectly happy if affairs stayed that way indefinitely.

There were caveats, however, and they are not negligible. More online players means a greater strain on the hardware, which showed promptly. Oftentimes during peak hours, the servers would begin to experience lag, lessening the enjoyment of playing. Part of this could be fixed with better hardware. We upgraded back then to a better machine and are set to do it again when possible. All the same, an investment in more powerful hardware is expensive and not a sustainable solution. Much of our infrastructure was developed with a small player pool in mind and not ready to scale up. This last year and a half encompassed a large scale restructuring thereof, to the point where we can allow more simultaneously connected players without affecting the performance of our services.

As a consequence, entertaining an ever increasing amount of players, maintaining a greater variety of interconnected servers, developing a plethora of plugins, hosting events every Saturday and Sunday, was all adding up, and still is, not to mention the mere cost of renting hardware. This is why our store was established.

I was very nervous to see how you guys would react, especially considering in this age of video games where good games are all too often bogged down to the brink of ruin with various microtransactions. I am confident that the offerings on our store are morally virtuous, but could not be sure that it would be perceived as such by everyone. Thus, it was encouraging to witness how well it has been received, with several packages being purchased every week. We will continue developing the store as an optional means of supporting the server. I can promise that there will be no exploitative tactics and all packages on the store will affect “winning” as little as possible. And of course, the Cavetale experience will always remain free to access by anyone, with no payment required to progress.

Back in 2022, back to Minecraft. Earlier this year we saw the release of one of its most expansive updates yet, the Caves and Cliffs, turning our world upside down. Just now there was The Wild Update, adding even more biomes, mobs and items. Cavetale is constantly evolving: The last big addition were trophies, and we overhauled many of our staple plugins to be fit for the future, including Mass Storage and Auctions. Both can now hold our custom items alongside vanilla ones, are portable across servers, and present themselves nicely within the constraints of the official client. In a way, we are back to square one and are now looking forward to building on top of what we have to give you all an even better time while playing on Cavetale.

At every step of the way, your feedback is always what informs our decision making and shapes development. While I do not always reply quite as diligently as I would like, the Discord channels for ideas, bugs and feedback are always on my watch list, I never miss a post, and they often lead to patches big or small. As was implied, these past months saw energetic development, so not everything that was posted there could be considered in time, but it may still be revisited when future updates are due.

Back to you, the player, who this entire show is all about. A journey was many times alluded to, yet most of you will already be at the end of theirs. This season started in 2018, and even if you joined later, you are very unlikely to have experienced many of Cavetale’s staple qualities from the viewpoint they are intended for: The new player. Whenever they were added, you were most likely already done with them. Our world is old, our stores are filled with precious items, our bank account holds more than we could ever spend. The beginner tutorial only takes us to previously visited territory. No raid boss can get in your way. If I added a new item right now, you would likely already have something better. It is tough to give you anything worthwhile to strive for, myself included.

With that in mind, it is time to announce a new chapter, which is Season 5. Near the end of this month of June, we would like to invite you all to a new start in a fresh world, with empty inventories. The home worlds as they are right now will be available even after the launch for the new season to those who wish to finish up any projects they may still have. The rest of us will start over, reliving everything that was added over the course of this eventful season, and much more going forward.