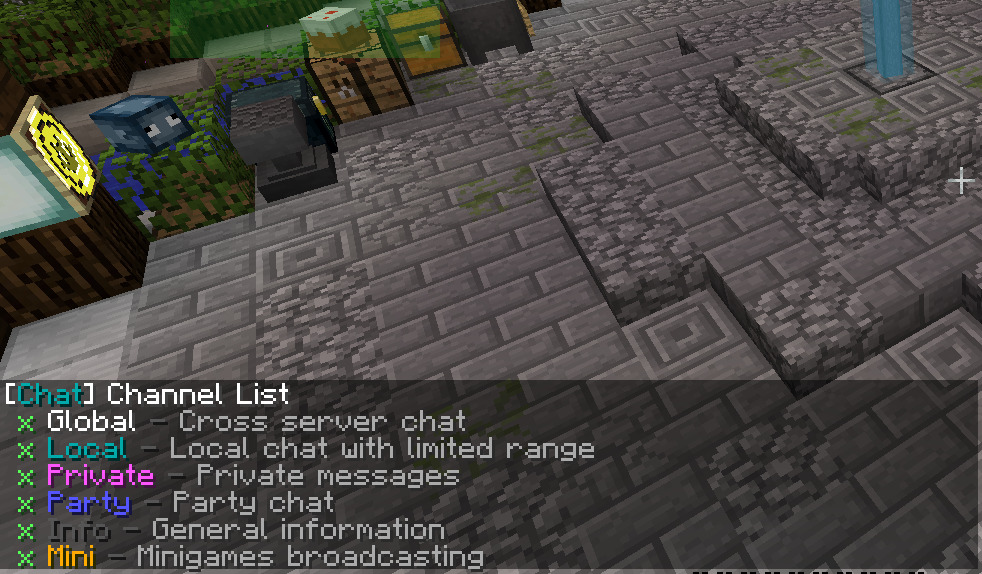 The chat on Winthier is organized into several channels, to separate what is talked about in your surroundings. Some of the channels allow players to speak with their friends, while others display server messages and minigame information.

You may join and leave each channel as you please. Additionally, you may focus on one chat channel at a time, which is where your messages will be displayed unless you specify otherwise.

Our chat system consists of six channels. You can listen to any number of them, but may only speak in one at a time. The channels are as follows:

Each channel has a short abbreviation that you can use instead of the name. You must be in a channel to talk in it.

Chat settings
In the chat menu (/ch), click on a channel to edit its settings.

Joining and leaving channels, plus some additional features, can be done via commands. Like any other command, they start with a slash. Commands are very straightforward. You can replace the channel argument with either the name or the one letter shortcut of one of our chat channels.

You can send private messages to other players and start private conversations that way.

Leaving out the player argument gives you a list of the players you are ignoring.

You can create your own chat channels for you and your friends via party chat. All it takes is a made up party name that is known among your peers. You can only be in one party at a time.